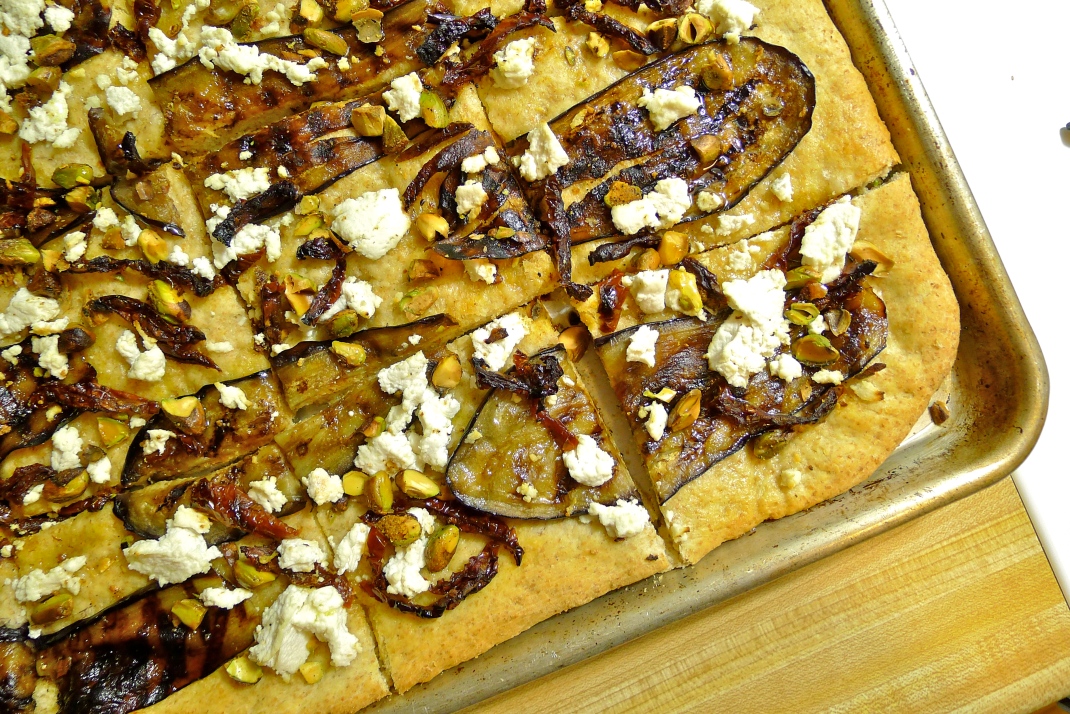 This was the Daring Kitchen challenge that almost didn’t happen. After a few weeks of thinking, toying with ideas and brainstorming, the challenge got put on hold and then was quickly buried under a sea of other priorities. When I finally got around to making a grocery list and buying ingredients, my oven promptly decided that it was no longer participating in my kitchen adventures 😦

I thought about changing direction and doing something else, but my heart had been set on making a flatbread. I went as far as to contemplate doing the flatbread in a cast-iron pan on top of the stove (the stovetop was still working) and using a mini-blowtorch to char the top of it.

I even went out and bought pressurized butane despite having doubts that my newly acquired mini-torch — meant for itty bitty crèmes brûlées — would probably melt or malfunction if used on something as big as a 12 or 14-inch pizza . . .

Thankfully, my oven got fixed a lot sooner than anticipated — which just goes to show that you can get anything fixed in this town so long as you utter three magic words:

I thought that was pretty smart of me 😉

Once the oven was fixed, I was back on track, though given the chance, I would have tinkered with the recipe more before posting. To make up for how rough the recipe is, I have written the recipe based what I would do it if I were to make it again — like use a lot more eggplant!

Also, I would suggest that you tinker a little bit with your cooking times and temperatures as it appears that when they fixed my oven, they also re-calibrated it so that it seems to run hotter that it did before.

This month, David and Karen from Twenty-Fingered Cooking challenged us to come up with our own recipes using the three lists of challenge ingredients. The recipe must include at least one item from each list, and if we fail, we must order a pizza.

The challenge lists were:

When I first saw the challenge, I was thinking of a balsamic, instant coffee and maple syrup-glazed steak on top of a parsnip-goat cheese purée.

Then I thought about using the eggplant and cauliflower to make a vegetarian chili with chipotle peppers and instant coffee.

Then I thought that it would be fun to try to challenge myself to make the most inedible dish possible. Some kind of cauliflower-instant coffee banana cream pie, or a banana-chipotle baba ghanoush, but I felt like that might be a violation of the challenge’s good spirit.

To save me from myself, I threw the idea out to amazing Heather over at Ruby and Wheaky (one of my favorite blogs and one of my favorite bloggers — do check her site out when you get the chance! She is a phenomenal writer). She suggested a “maple syrup and chipotle-glazed cauliflower dish,” “an instant coffee dusted baked/fried eggplant dish with a goat cheese topping,” “an eggplant, goat cheese sandwich with a side dish of coffee-infused banana chips,” or “a crazy sort of eggplant, goat cheese pizza topped with maple- glazed pistachio nuts.”

As you can see, her ideas were way better than mine!

A giant thank you to David and Karen for the great challenge! I had a ton of fun dreaming up different recipes. Your challenge made me feel like an Iron Chef!

Blog-checking lines:
Our April 2012 Daring Cooks hosts were David & Karen from Twenty-Fingered Cooking. They presented us with a very daring and unique challenge of forming our own recipes by using a set list of ingredients!

2 cups of bread or all-purpose flour

1/3 of a cup of shelled pistachios

1. In a large bowl, mix together the yeast and the warm water. Let the yeast bloom undisturbed for about 10 minutes.

2. In a separate bowl, mix the two flours together. Once the yeast has bloomed, add the salt and two tablespoons of olive oil. Stir in the flour, a little bit at a time, with a wooden spoon until it has all been incorporated. Turn the dough out onto a lightly floured countertop and knead it for about 6-8 minutes until the dough is soft and satiny. Shape the dough into a ball and place it in a lightly oiled bowl. Cover the bowl tightly with plastic wrap and let it rise until it has doubled, about 1 1/2 to 2 hours.

3. In the meanwhile, prepare the eggplant. In a small bowl, whisk together the balsamic vinegar and 1 teaspoon of salt. Let sit for a minute or two to let the salt dissolve. Whisk in about four tablespoons of olive oil. Brush both sides of each eggplant slice with the balsamic-olive oil mixture.

4. Brush a grill pan lightly with olive oil and heat it over medium-high heat. When the oil just begins to smoke, lay a few slices of eggplant on the grill. Grill the slices for a minute or two on each side. If you want, you can give the slices a quarter turn on the grill so that they have some nice grill marks. Remove the slices to a plate as you finish them.

5. Preheat the oven to 350°. In a small bowl, toss the shelled pistachios with the maple sugar or maple syrup, the chipotle pepper powder and a drizzle of olive oil until they are evenly coated. Toast the nuts for no more than 5 minutes, checking them frequently to make sure that they don’t burn. Remove the nuts from the oven and let them cool before roughly chopping them.

6. Turn the oven up to 425°. Punch the risen dough down and stretch it out to cover the bottom of a half-sheet pan. Lightly brush the surface with olive oil and evenly arrange the grilled eggplant slices over the top. Scatter the sun-dried tomatoes and the goat cheese evenly over the eggplant. Bake the flatbread in the oven for about 10-15 minutes. The dough should be crisp and the edges should be browned. Remove it from the oven and scatter the chopped pistachios over the top. Drizzle the flatbread with olive oil and cut into squares to serve.