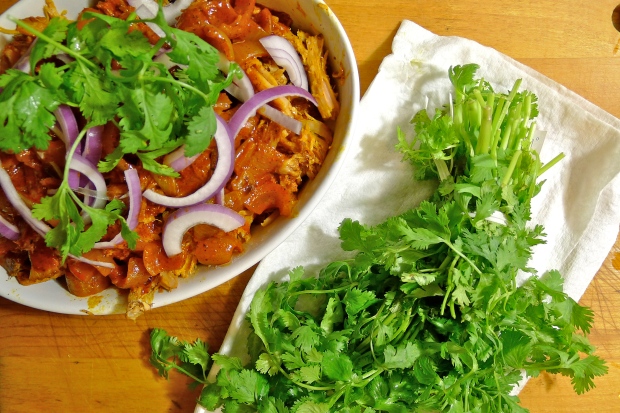 For years I have been both intrigued and repelled by the family meal, the meal cooked just for the restaurant staff to eat before service. Intrigued, obviously, because I have always wondered what the staff is eating without me. Repelled because, quite frankly, I have heard some awful stories about family meals being a way to unload unsaleable garbage onto servers and dishwashers. Many times it sounds like prison food without the cable TV. Or school lunches without Jamie Oliver. In a Washington Post article published a few years back, writer Matt Bonesteel reported that chef Bill Fuller used to make family meals out of “squash guts,” ostensibly the “remnants of yellow squash and zucchini that had had their yellow and green exteriors shaved off with a mandoline for vegetable spaghetti.”

“When the dishwashers stop eating it,” Fuller said, “It’s time to not serve it anymore.”

Having never worked in a restaurant myself, I can only speculate that some family meals are very nice, and some are as revolting as the ones shown on thisfamilymealsucks. True, some restaurants feed their staffs by having them order off the menu. (Now that sounds great!) However, in the case of many notable restaurants, it seems very unlikely that staff members are given free rein to have as much foie gras and caviar bubbles as they want. As put in the introduction to Ferran Adrià‘s newish book The Family Meal: Home Cooking with Ferran Adrià, “You might assume that the staff would eat the same food as the guests, but they don’t. In fact, people are often surprised when we tell them that we eat ordinary food.”

Note that he says “ordinary food,” not garbage, as it really should be in the restaurant’s best interest to keep their workers happy by feeding them well.

Also note that “ordinary food” coming out of elBulli‘s kitchen is more than likely extraordinary food for simple, common folk like you and me.

Restaurant family meals, good or bad, all seem to share two things: they are extremely economical, and they are meant to feed a crowd. This might explain why all the recipes in The Family Meal have the ingredients listed in a conversion table that allows you to adjust the recipe for parties of 2, 6, 20, and 75.

This recipe is adapted from Adrià’s in a few ways: I added garlic (weirdly missing), adjusted the amount of achiote paste (the original calls for 6 1/4 ounces, which is just a freakishly unappealing amount of annatto), and changed the cooking time and temperature (the book calls for 2 1/2 pounds of pork shoulder to be cooked at 400° for over 4 hours — not appealing either given I wouldn’t cook a 20+ pound turkey for that long).

The pork — even with less achiote and less time in the oven at a lower temperature — still turned out full and flavorful. It fell apart in a satisfying mess while I was shredding it with two forks. A sloppy, fatty, tangy yum-yum of a mess.

As for economical? Pork shoulder is a relatively inexpensive cut. You probably have the rest of the ingredients lying around the house, except for maybe the achiote paste.

Achiote paste can sometimes be found in the “ethnic” food aisle here in the US. Mine was only $0.99 at the Mexican grocery (slightly more expensive online). You can also make your own fairly easily.

(Man, I’m starting to feel like Frugal Feeding over here with all this talk of dollars and cents!)

I served the pork with some homemade guacamole and some fresh, juicy lime wedges on the side. Neither were suggested by the original recipe, I suspect out of respect for the bottom line. I can imagine fresh limes and avocados for 75 hungry staff members to be beyond the budget at ol’ elBulli.

But that doesn’t mean that you should hold back! Creamy avocado is a terrific, nay sinful counterpoint to rich and citrusy pork.

All in all, this was a meal that was far from ordinary!

1. To make the marinade, combine the orange juice, the cumin, the oregano, the achiote paste, the apple cider vinegar and the garlic in a deep bowl. Using a handheld immersion blender, whizz all the ingredients together until the marinade is smooth and creamy.

2. Using the point of a small paring knife, deeply prick the meat all over so that the marinade can penetrate it. Season the pork well with salt and pepper.

3. Line a baking dish with a large piece of heavy-duty aluminum foil. Place the meat in the middle of it and bring up the sides to create a well. Carefully pour the marinade over the pork. Scatter the onions over the top. Fold the foil over the meat to make a tight parcel. You might need to use a second piece of aluminum foil to make sure the pork is completely covered. The most important thing is that you seal all of the edges well so that no steam can escape. Let the meat marinate for about 30-40 minutes on the countertop, or up to 12 hours in the refrigerator.

4. Preheat the oven to 350°. Roast the pork for about 3 to 3 1/2 hours. After you remove the pork from the oven, let it rest for about 10-15 minutes before carefully opening the aluminum foil.

5. While the pork is resting, warm or toast the tortillas on both sides in a large cast-iron skillet set over medium-high heat. Nestle the tortillas in between a napkin on a warmed plate while you finish the rest.

6. Remove the pork to a cutting board and remove all the strings. Use two forks to gently shred the pork. Pile the shredded pork in a large bowl or dish. Skim as much fat from the surface of the saucy cooking liquid as possible, and spoon as much of it as you want over the pork. Scatter some red onion slices over the top, along with some sprigs of cilantro.

To assemble, pile a good amount of pork onto a warm tortilla. Top it with some of the remaining red onion, a dollop of guacamole and a spritz of lime juice.