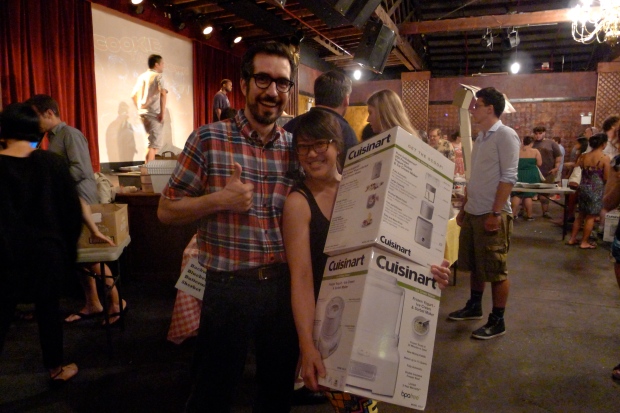 Needless to say, I think that I have become addicted to the adrenaline rush of coming up with a recipe and prepping massive amounts (250+ samples) of it for a day filled with old and new friends, large quantities of booze, and lots of fun!

In all honesty, the event is kind of a blur to me since the participants had a head start on the open bar before the doors opened to the public. Once people started pouring in, I was drunkenly scooping like a fiend! There were so many people coming to the table at once that I didn’t even notice that Tyra Banks was there! In my hurry to get everyone served, I just plunked a sample cup on her plate, said that it was Blueberry Buttermilk Moonshine Sherbet, and waved her on.

Only afterwards did someone say, “Daisy, you just threw sherbet at Tyra Banks!”

The decision to make a sherbet was a last minute one, forced by an uncooperative freezer and a look at the weekend forecast which predicted a RealFeel afternoon temperature of 107°. Full details to be revealed when I post the recipe, hopefully later this week.

Unpacking at the venue, I was certain that my entry was too simple and too plain to attract much attention — even with the moonshine.* Win or lose, I thought, I learned so much about making frozen desserts and being surrounded by so many talented and creative home cooks was gravy. That made the experience well worth it.

In the end, guess who was awarded second place by the judges AND by the people? Me 🙂

What did I win? More ice cream makers!

Just what I need 🙂

Even though I didn’t come in first place, I was the only one to win in both categories and the only one to take home two machines! However, I do have to give a shout-out to all the other incredible cooks. The team next to me actually made 275 cannoli shell ice cream cones. Isn’t that amazing? Other contestants make jam toppings and delicious drizzles in squeeze bottles. As for the two first place winners? Angie Anicgacz’s Lemon Meringue Pie Ice Cream and Russell and Karen Berger’s Butterscotch Beatdown were truly divine!

So what about those two ice cream makers? I kept one and gave one to my helper and good friend, David. He earned it for coming to my apartment early and schlepping all my stuff to the event like a trooper!

Then I went home and collapsed.

The Takedowns are the brainchild of my friend, the incredibly gracious Matt Timms. He is certainly the host with the most and it has been wonderful to see him and his events get such great press. I’ve never known anyone to walk away from a Takedown unhappy and this event was no exception. Thank you, Matt!

For those of you who are interested, here are some links with much better write-ups than my own!

* Yes, there was real moonshine in the sherbet! No, I did not make it. Yes, you can absolutely buy corn whiskey. It comes in Mason jars 🙂