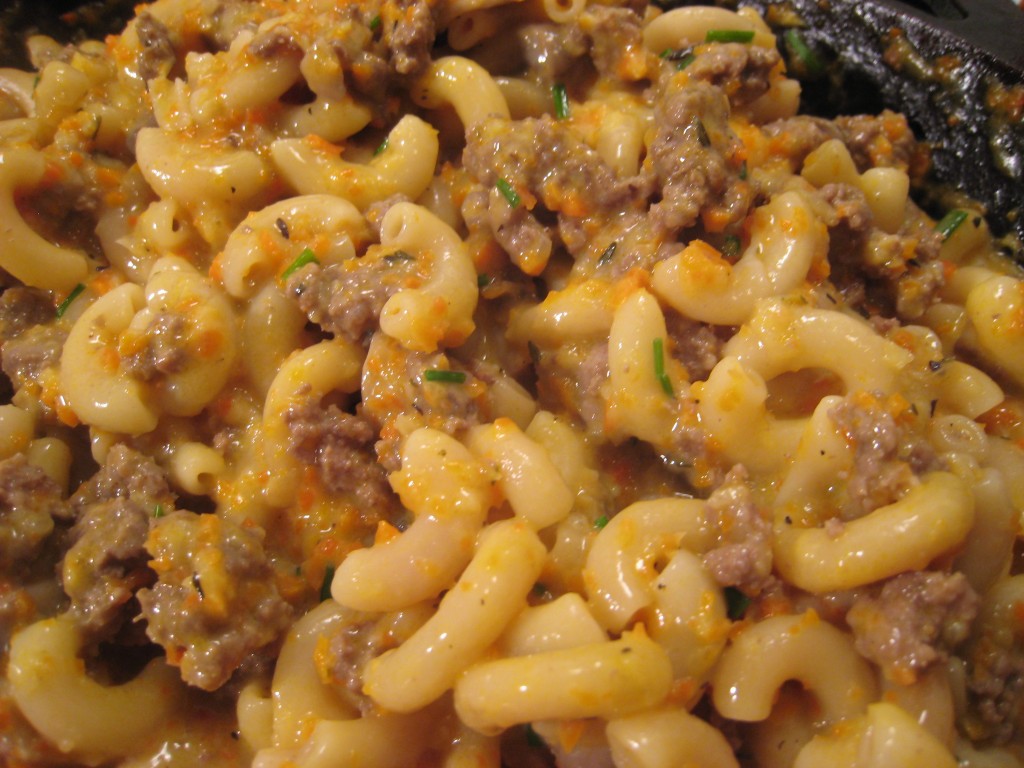 Feeding my brothers and myself must have been a challenge for my mother. Raised in Hong Kong, she grew up with a keen taste for fried dace and chicken feet — something that she failed to pass on to her Americanized kids. Consequently, she found convenience foods to be, well, really convenient!

One of those was Hamburger Helper. You remember it: the prepackaged sodium-bomb, like macaroni and powdered cheese mix but with meat that you had to add. When I started cooking for myself, it was foods like this that I rebelled against, forsaking as well store-bought salad dressings and mayonnaise in favor of making them from scratch like a good little French bonne femme.

Over time, I’ve found that hard feelings against certain foods does soften, and when contemplating what to do with a lone pound of CSA ground beef, I decided to recreate that fresh-from-the-box flavor without the box.

This recipe is a variation on one that appeared on Eating Well’s site called “Hamburger Buddy.” Clearly, that recipe was designed to surreptitiously feed fussy children vegetables by processing their suggested daily servings into indistinguishable purée.

While this might fool kids, it did not fool my boyfriend (“What is this? CARROTS?!).

I actually didn’t mind the carrots, but as adults feeding adults, I don’t think that you need to be so sneaky. Upon reflection, the dish would probably taste closer to the “real” thing if the carrots were omitted. It is quite tasty nevertheless. Betty Crocker be damned!

2. Cook the beef in a large straight-sided skillet or Dutch oven over medium-high heat, breaking it up with a wooden spoon until it is no longer pink. This should take about 3 to 5 minutes. Stir in the mushrooms, chopped vegetables, and thyme. Stirring often, cook until the vegetables begin to soften and the mushrooms release their juices, about 5 to 7 minutes.

3. Stir in the water, chicken stock, macaroni and Worcestershire sauce. Bring everything to a boil. Reduce heat to medium and continue to cook, stirring occasionally, until the pasta is tender, about 8 to 10 minutes.

4. Stir in the sour cream and the shredded cheese. Adjust seasoning. Simmer, stirring often, until the sauce has thickened, about 2 minutes. Toss in the parsley or chives right before serving, stirring in order to distribute the fresh herbs evenly throughout the pasta.